Yale University professor Daniel J. Abadi has led the development of HadoopDB, an open source parallel database management system (DBMS) that combines the data-processing capabilities of a relational database with the scalability of new technologies such as Hadoop and MapReduce. HadoopDB was developed using components from PostgreSQL, the Apache Hadoop data-sorting technology, and Hive, the international Hadoop project launched by Facebook. HadoopDB queries can be submitted as either MapReduce or in SQL language. Abadi says data processing is partially done in Hadoop and partially in "different PostgreSQL instances" spread out over several nodes in a shared-nothing cluster of machines. He says that unlike previously developed DBMS projects, HadoopDB is not a hybrid only at the language/interface level, but also at the systems implementation level. Abadi says HadoopDB combines the best of both approaches to achieve the fault tolerance of massively parallel data infrastructures, such as MapReduce, in which a single server failure has little effect on the overall grid, and is capable of performing complex analyses almost as quickly as existing commercial parallel databases. He says that as databases continue to grow, systems such as HadoopDB will "scale much better than parallel databases."
Posted by Vinoth Kumar at 3:11 AM No comments:

The United States must capitalize on emerging opportunities in order to regain the top spot in innovation, federal chief technology officer Aneesh Chopra said in a keynote address to the recent Open Government and Innovations Conference in Washington, D.C. The Obama administration is investing in technology such as healthcare information technology and the smart grid, and these investments offer the United States an opportunity to take the lead in these areas, he said. "Driving game-changing innovation" will be a focus of Chopra, who added that open data standards, research and development investment, and preparing the workforce for jobs of the future will help spur innovation. Chopra cited a report from the Information Technology and Innovation Foundation that ranks the United States last among 36 countries on technology metrics such broadband activity, research and development tax credits, and immigration policy. "We have failed to translate the power and potential in our nation's capacity to compete in a more globally competitive marketplace," he said.
Posted by Vinoth Kumar at 3:08 AM No comments:

NICTA opens its software to the world

The National ICT Australia (NICTA) research organization has launched the OpenNICTA portal, which will allow people to view and download software developed and licensed by NICTA. OpenNICTA will serve a major role in the organization's effort to gain international attention and collaboration, says NICTA's Gernot Heiser. "Open source software is impossible to ignore and it is an important way for people to collaborate," Heiser says. OpenNICTA will offer access to 11 NICTA-developed open source releases initially, with the total number rapidly expanding during the next year. Heiser says he would like to see other research organizations follow NICTA's lead and formalize processes for releasing software to the open source community. He says research organizations have been releasing software back to the open source community for years, but the releases are generally done in an ad-hoc fashion and below the radar of authorities and the public. NICTA now has a formal process of determining if a project should be released as open source. "This procedure is something we can improve on," Heiser says. "At the moment, our hurdles are still on the high side, but it is natural that people are cautious initially."
TO VIEW FULL ARTICLE
Posted by Vinoth Kumar at 5:39 PM No comments: 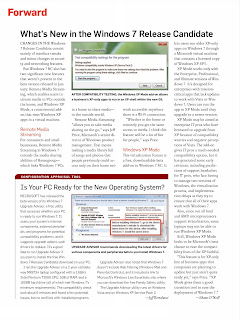 Windows 7 full versoin is not yet released.
Microsoft released a release candidate version.
Posted by Vinoth Kumar at 4:26 PM No comments: