All the logos of the company

follow this link to know about all hte company logos and mascots
http://tech-fact.blogspot.com/2006_04_01_archive.html
Posted by Vinoth Kumar at 5:02 PM No comments: 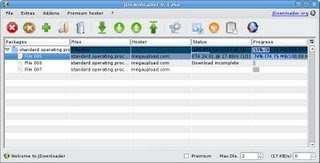 Short description (by myself):

Description from Homepage:
JDownloader is open source, platform independent and written completely in Java. It simplifies downloading files from One-Click-Hosters like Rapidshare.com or Megaupload.com - not only for users with a premium account but also for users who don't pay. It offers downloading in multiple paralell streams, captcha recognition, automatical file extraction and much more. Of course, JDownloader is absolutely free of charge. Additionally, many "link encryption" sites are supported - so you just paste the "encrypted" links and JD does the rest. JDownloader can import CCF, RSDF and the new DLC files.

Posted by Vinoth Kumar at 4:22 PM No comments:

Opera Wants To Make Your Computer Part Of The Cloud

Opera has recently announced a new software/service offering called Opera Unite. This is included in a beta version of the Opera 10 browser that you can download directly from the company's website. With Unite Opera plans to help you bring a piece of the cloud home with you, by allowing you to simple and almost effortlessly host content for public consumption, within your own computer.

Opera Unite will work as a platform, allowing new services to be added to the browser and thus adding new functionality for the end user. What interest this platform will stir up amongst developers is still too soon to tell.

While the concept is rather interesting whether or not the implementation will prove to be useful, or even usable, also remains to be seen. The main drawback to proposed approach is that while more and more people have permanent broadband connections to the Internet, even more people have notebook computers which they carry around all the time and which are thus unavailable to serve content on-line. This can, however, prove to be a powerful tool for people working in small distributed groups or that are part of tight communities such as college students.

My first contact with Unite has me interested but not yet overly optimistic about its usability. I will continue to follow the product's development, and even more importantly to follow what new services are added to this platform Opera is introducing.

What do you think of Opera Unite?

Posted by Vinoth Kumar at 12:24 AM No comments:

Posted by Vinoth Kumar at 7:09 PM No comments:

Linux Is Step Ahead

Most of them not understand about difference between Linux and Microsoft

LINUX:
There are lots to say about the history of linux but it goes for a long so just have a look at of overview.
History of Linux
This is how the linux is marked a special history

Posted by Vinoth Kumar at 5:53 PM No comments:

The HotCloud conference on cloud computing in San Diego will showcase a number of research projects. One such project is a Trusted Cloud Computing Platform developed by researchers at the Max Planck Institute for Software Systems that "enables Infrastructure as a Service (IaaS) providers such as Amazon EC2 to provide a closed box execution environment that guarantees confidential execution of guest virtual machines (VMs)." The platform would guarantee customers that their data has not been interfered with by service providers while also allowing service providers to secure data even across many VMs. Meanwhile, University of Washington researchers are exploiting the fact that Web services and applications will be very closely situated to develop CloudViews, a common storage system designed "to facilitate collaboration through protected inter-service data sharing." University of Minnesota researchers have outlined a way to form nebulas from distributed voluntary resources that could provide greater scalability, more geographical dispersion of nodes, and lower cost than traditional managed clouds. Researchers at the University of California Santa Cruz, NetApp, and Pergamum Systems are considering the trade-offs between storing data and recalculating results as needed in an attempt to boost the efficiency of cloud computing. They write in a paper that "recomputation as a replacement for storage fits well into the holistic model of computing described by the cloud architecture. With its dynamically scalable and virtualized architecture, cloud computing aims to abstract away the details of underlying infrastructure. In both public and private clouds, the user is encouraged to think in terms of services, not structure."
TO VIEW FULL ARTICLE
Posted by Vinoth Kumar at 5:51 PM 21 comments:

The U.S. space shuttle's current mission, one of the most technical ever attempted by NASA, would not be possible without the use of robotics, says Holly Ridings, the lead space station flight director for the Endeavour mission. "We have learned a lot about robotics and about working together with a robot," Ridings says. "Robotics is really one of the things that NASA has a lot of experience in and it's allowing us to do some wonderful things on the space station." After docking with the space station on the morning of June 15th, the Endeavour crew will take the mission's first spacewalk, assisted by two robotic arms. Ridings says that while the astronauts work outside the space station, a robotic arm will lift a 4-ton piece of the Japanese complex out of the shuttle's payload bay. The piece, which will be attached to the outside of the Japanese module, is designed to hold its own payloads and host experiments that need to be conducted in outer space. In addition to the station's two main robotic arms, which will hand off the new piece between them several times during the mission, a third robotic arm, attached to the Japanese module, will be used for the first time in about a week. The third arm, installed in June 2008, will pick up and move payloads to the new piece. The robotic arm's software features several redundancies and five to seven things would have to go wrong for the arm to let go of the space station and drift away, Ridings says.
TO VIEW FULL ARTICLE
Posted by Vinoth Kumar at 5:47 PM No comments:

A new report from the Schools, Health and Libraries Broadband (SHLB) Coalition says that schools, libraries, and healthcare providers in the United States need broadband speeds of 100 Mbps to 1 Gbps to adequately serve their customers' needs. The SHLB Coalition, which features 28 members, including the New America Foundation, the American Library Association, Internet 2, and Educause, is urging U.S. federal, state, and local governments to seriously consider the needs of libraries, schools, and healthcare providers when developing broadband deployment plans. "High-speed broadband is the key infrastructure that K-12 schools, universities, libraries, hospitals, clinics, and other healthcare providers need to provide 21st-century education, information, and health services," says SHLB coordinator John Windhausen. The institutions are core elements of communities, and affordable, high-speed broadband will help both their immediate customers and surrounding neighborhoods through shared networks, says New America Foundation Wireless Future Program director Michael Calabrese. "The most promising public investment, given limited resources, would be high-capacity fiber networks connecting community anchor institutions in every local jurisdiction," Calabrese says. "By becoming both technology hubs and bringing fiber deep into every community, schools, libraries, and healthcare providers will [bring] affordable broadband access to everyone."
TO VIEW FULL ARTICLE
Posted by Vinoth Kumar at 5:37 PM No comments:

Researchers at Rensselaer Polytechnic Institute have created a model that can generate picture-perfect images of lunar eclipses. Professor Barbara Cutler assisted graduate student Theodore C. Yapo with configuring and combining models for sunlight, the solar system, and the different layers and effects of the Earth's atmosphere to simulate and render a visualization of a lunar eclipse. The tool can show how famous eclipses in history look, how future ones will look, and how they would appear to someone in New York, Rome, or from any other geographical location on Earth.
Cutler and Yapo say it is almost impossible to distinguish the computer-generated images of eclipses from actual photos. "Other researchers have rendered the night sky, the moon, and sunsets, but this is the first time anyone has rendered lunar eclipses," Cutler says. "Our models may help with investigations into historical atmospheric phenomena, and they could also be of interest to artists looking to add this special effect to their toolbox."
TO VIEW FULL ARTICLE
http://news.rpi.edu/update.do?artcenterkey=2596&setappvar=page(1)
Posted by Vinoth Kumar at 5:30 PM No comments:

European researchers working on the Nanospin project have developed spintronic devices using ferromagnetic semiconductors. Although still in development, spintronics has already led to faster, instant-on technology and massive increases in data storage capacity. Spintronic devices also use little power and are highly scalable. "It takes a very low current to switch spin, which makes these devices very efficient," says Nanospin co-coordinator Charles Gould. He also says that, theoretically, spintronic devices could have very high switching speeds. "We have not proven this in the lab yet, but many results in the theory have already been proven, so high switching speeds [are quite likely]," Gould says. The Nanospin project sought to achieve four objectives: writing information to ferromagnetic semiconductors, retrieving that information, switching between different states at high speeds, and the theoretical modeling of the devices to explain their operation and optimize performance. The researchers say the project was successful on all accounts. "Currently, we are looking at logic schemes for spintronics, so we are moving from memory and storage to processing," Gould says.
To view full article
http://cordis.europa.eu/ictresults/index.cfm?section=news&tpl=article&BrowsingType=Features&ID=90653
Posted by Vinoth Kumar at 5:17 PM No comments: