what do google and bing think each other

Hi friends
This looks very funny
Google Search has a feature called Search Suggestions which drop down suggestions as you type in a query. Now Bing also comes with search suggestions.

What does Google think of Bing? 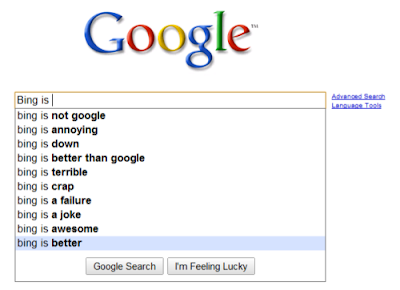 What does Bing think of Google? 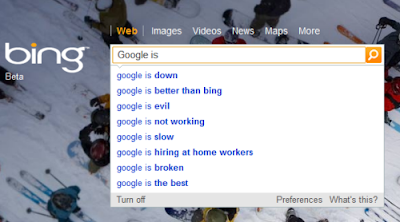 Posted by Vinoth Kumar at 6:10 PM No comments:

Passwords that never use

and also its my kind advice is not to use your name,age,ph no,mobile no
because its very easy to hack for ex: if ur passowrd is name "vinoth" totally 6!=720 so i can find 720 possibilities of my name so that any one hack by writing program for it.......
Posted by Vinoth Kumar at 9:45 PM No comments:

"It really speaks to a Web 2.0 world. People communicate differently today, people transact and pay their bills differently today, and that drives today's criminals," ABC Science quoted David Marcus, director of security research and communications for McAfee Labs, which this week released its 2010 Threat Predictions report, as saying.
According to McAfee, Facebook, Twitter and other social networking sites-will become major targets for cyber criminals.
Symantec said in its recent report on 2010 threats, URL shortening services will "become the phisher's best friend."
Some criminals have already learned how to bypass the banks' second layer of protection.

Resource
http://in.yearinreview.yahoo.com/2009/blog/19
Posted by Vinoth Kumar at 6:20 PM No comments: